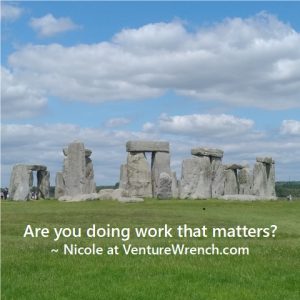 When I was an MBA student at Stanford, Jim Collins was one of the most popular professors.  I had the privilege of taking his entrepreneurship class while he was writing the, now classic, book Built to Last. I also had the privilege of writing a published case study with Jim and later serving as a critical reader for some of his books.

As I mentioned, we’ve been in Europe for the last few weeks and some of the neolithic and pre-historic monuments and objects that we saw prompted me to ask the question, am I doing work that is Built to Last? Coming face to face with places and objects that have been around for thousands of years gave me pause.  In our fast paced, tech fueled world, are we making anything that will last?  Anything that will really change the future?  Or will all our work be as ephemeral as the internet itself? 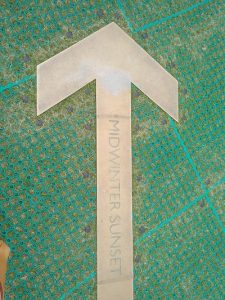 Stonehenge is obviously iconic, and is estimated to have been constructed between 3000 BC and 2000 BC.  The day we were there was beautiful, sunny with a few clouds.  We circled around the monument, erected thousands of years ago by people who apparently didn’t possess the wheel or even much in the way of simple machines, but who were compelled to erect a solar monument with a lot of staying power.  Yes, a few of the stones have been propped up here and there, but the sun still lines up with Stonehenge and its outlying Heel Stone pointing to the midwinter solstice sunset (The solstice sunset market in the ground at Stonehenge is pictured on the right).

We had the privilege of spending nearly 2 weeks in Ireland (yes, Toomey is a good Irish name!) and visiting an even older Neolithic monument, at

Newgrange.  Over 5200 years ago, about 3200 BC, these earlier neolithic people constructed this “passage tomb”, with decorations carved in stone both inside and outside of the monument.  Even more amazing, the corbeled vault roof, which is made of stacked stone rising to at least 16 feet inside, is nearly perfectly waterproof (there is no sign of meaningful water penetration on the interior), and in Ireland that is saying something about the engineering!

The National Museum of Ireland had on display artifacts dating from as early as 4000 BC.  These included decorated pots, finely polished jadeite axheads and other items from these early people.  These items were beautifully crafted and, to quote Jim Collins “Built to Last.”

What are you building to last?